The last school lunch of 2012 is the Christmas Menu. This year’s Christmas cake doesn’t use eggs, milk, or wheat, so those with allergies can feel safe to eat it.

Japan has whole-heartedly embraced the commercial Christmas celebration as sold by America. I can’t really approve with sickeningly sweet distortion of a holiday it has become here or there, but Japan means well. Two “Japanese” Christmas traditions are to eat chicken (ie, Kentucky fried) and cake, and you can see this reflected in this lunch menu.

Cool thing about the cake this year is it is ‘okome’ which as I have explained before means it is made with rice flour and other local ingredients. Merry Christmas!

Does everyone remember the “Sauteed Bacon and Veggies”? It’s been three years since it has made an appearance. We’ll be happy if you eat it without being picky.

Shrimp Dumpling Soup was delicious as always. I love soup. I love dumplings. While some students were put off by the look of the Sauteed Bacon and Veggies, the students who tried it declared it “うまい” and even “めっちゃうまい” to their skeptical classmates. It was good. As you know I don’t gnaw on bones, so I was fortunate to be able to pawn off my drumette on a student.

Koppe-pan (bread) is apparently a Japanization of the French “coupé pain,” which literally sliced bread. The wikipedia article gives “hotdog bun” as the English translation for koppe-pan, which is odd. I don’t personally see a strong resemblance. The koppe-pan at school is never sliced, but I guess food like “Cream-pan” (a long white roll with a revolting whipped cream filling) is also considered a form of koppe-pan and they must be sliced in order to be filled. Koppe-pan first gained attention as a food ration during WWII, in which one koppe-pan was considered enough for one person. After the war was over, koppe-pan was likewise served in school lunch as the main dish (confer: the left picture in my blog header). Most Japanese at this time were still not eating bread but America was pushing wheat on Japan, so they had to figure out in what way to make this cheap wheat edible. One would think noodles–which Japanese people were already use to eating–would be the obvious choice, but in the case of school lunch, they chose koppe-pan for 5 reasons wikipedia informs me of:

Even more fascinating, it says the original school lunch koppe-pan was made with :

Anyway, while koppe-pan has a sordid history of cultural imperialism, I still like it. Yum! Yum!

Recently, there was a new discovery in Turkey. Many tools that substantiated the making of dairy products were discovered. They were 8500 years old.  Why don’t you become interested in history of zymotic foodstuffs?

Concerning today’s lunch, scotch eggs are really wonderful. They are so pretty and handy! I don’t eat meat at home, but if I did, I would like to try to make such a charming dish as scotch eggs. Today’s school lunch scotch egg was way overcooked, but I imagine that can’t be helped due to safety regulations. The chowder was quite nice too. It had several types of western vegetables, tasted quite bell pepper like and didn’t even given me a stomachache. Plus black bread and chowder are just a really nice mix. I love potatoes, so of course I also like today’s potato and bacon dish. I suppose it is European style because of the bright red tomato based (?)  sauce  used. Anyways, potatoes and edamame are a good mix. Thinking about it, I suppose I am just fond of Japanese style haole dishes. Yum! Yum!

Of the new discovery in Turkey, you can read more about it this anthropology article (bottom half). It isn’t very detailed, but still interesting. All humans were unable to drink milk (ie: lactose intolerant, like me!) back in the day. But this discovery in Turkey found that even though we couldn’t drink milk, we still raised cattle and then processed their milk into non-lactose products, like cheese and yogurt. That’s pretty awesome.

Kabocha pumpkins originally come from the country of Cambodia. Because the Portuguese introduced them to Japan as a Cambodian plant, they were originally called “Cambodian squash (kabocha uri)”.

In Japan, the word “pumpkin” does not refer to an american pumpkin of the jack o’lantern or pumpkin pie variety. Rather, it refers to the kabocha squash. The kabocha has a yellow flesh with green skin, and it’s texture resembles a potato. Nor does it taste at all like an american pumpkin. Thus the “pumpkin pie” made by students in English class is still very tasty, but not really pumpkin pie.

I once read in an etiquette book that you should follow your own culture’s customs, rather than offer your guests a poor imitation of their own. I think this is overall good advice. But it is difficult to follow if you come from a mixed culture. Personally, sitting on the floor has been a well-ingrained habit of mine since childhood. But as a white person, shouldn’t I offer my guests a chair?

Today starts boushu (lit. grain-in-ear), which is one of the 24 seasonal divisions when arista grains such as wheat and rice are planted. During this time, the farmers are very busy with planting seeds and other tasks.

At the school I went to today, there was no school lunch, so everybody brought their own bento. I forgot until the last minute, so I ended up with the only food in my house: umeboshi rice, carrots, and banana chips. Not true– I also had some takuan, but it wasn’t cut up yet, so I didn’t bring it today. One student related how nice it would be to bring bento everyday. Another student, who had to actually make her own bento today, disagreed. Think of the poor mothers who would have to make the bento everyday! In the teacher’s room, I overheard another comment: A bento made yourself never tastes that good. So people have many different opinions on the matter. 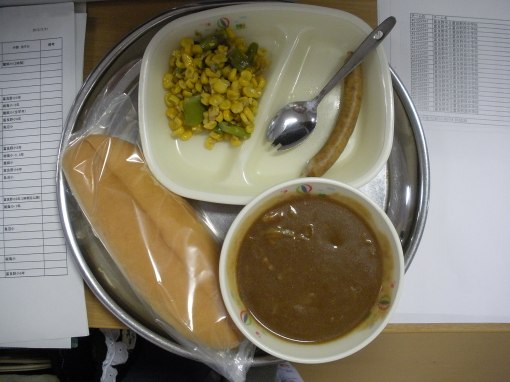 Asparagus includes plenty of vitamin B1 and B2 which helps break down sugar and lipids and is useful for replenishing your energy. Asparagus harvested in Spring is especially healthy.

Brown Stew is popular among students and teachers, and I too enjoyed it. As an interesting note, wiener is an alternative term for hotdog that comes the loverly city of Wien, that is Vienna. A hotdog is a sausage is in a bun. I was previously fuzzy on the exact difference of the terms.  Eating such a meal as this, I can’t help but recall my days of adventuring in medieval like fantasy worlds.  Brown stew seems just like the thing we might have mixed up in a cauldron over a fire in the middle of the woods and sausage is a time honoured way of preserving meat to take along on an arduous adventure. If the bread had been a little more waybread-like, I might have grabbed my hoopak and just skipped out door  in a fit of wanderlust. 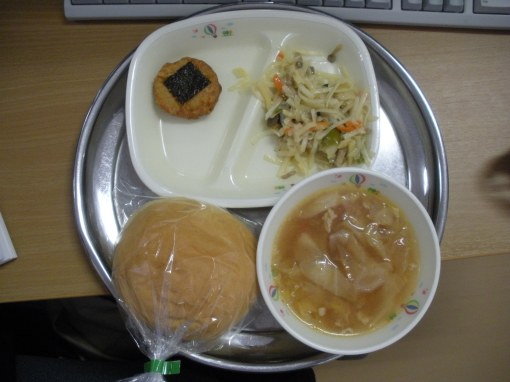 Note: Cabbage has plenty of vitamin C. When putting it in soup, both the flavour and the vitamin dissolves thoroughly in the soup.