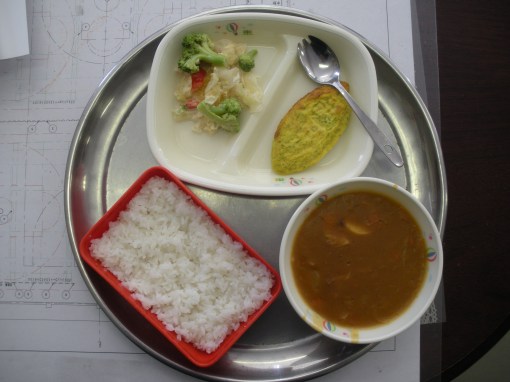 When meat was not eaten as much as it is today, ground foods were used as an ingredient in curry.  Most representative of these are fish sausage and chikuwa. Having listened to the children of olden times, what do you think?

I like chikuwa a lot, so I enjoyed today’s curry more than usual. Curry itself is a rather heavy dish I think, so using chikuwa rather than makes it a little light I feel. Not that it seems to have any less calories. Today’s salad was decent, but without much flavour. It was dressed in sesame and made of “western vegetables”, as broccoli etc. are sometimes advertised as here.

So, today was “old-fashioned” curry, so I thought I would post a recipe I translated from a Meiji period (1873) cook book I translated: 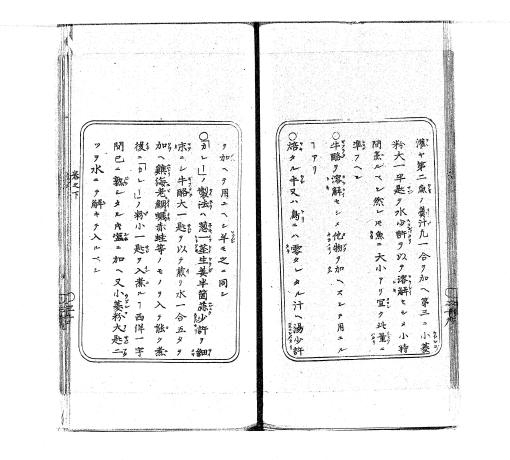 As for the method for making “curry”, you should cut finely one stalk of green onion, half a ginger, and a little bit of garlic. Add 1 and a half gou water with one large spoon of ox bone added to it. Add chicken, shrimp, sea bream, oyster, or red frog and boil well. Then, put in one small spoon of “curry” flour and simmer for one Western hour. After it is well cooked, add salt and two large spoons of wheat flour to the water, so it is dissolved.

To be honest, this recipe seems a little to difficult for my poor cooking skills, I can recall only lumpy less than successful results from my days when I still attempted to make things like flour thickened sauces. But I do like cooking from historical recipes. For example, I did make a delicious castella cake from the Meiji period recipe recorded by the Kaientai: 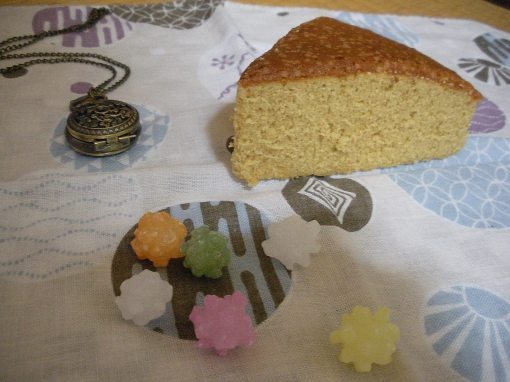 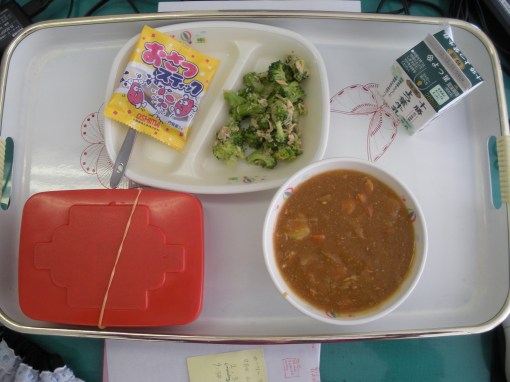 Broccoli is an unusual vegetable in both the stalk and flower buds are eaten. It is very nutritious and has many vitamins that help prevent colds.

Dressed Broccoli is amazingly tasty. I really wonder how they make it.

At the bottom of this month’s lunch menu:

Let’s eat anything, which being picky! Five points for overcoming picky eating: 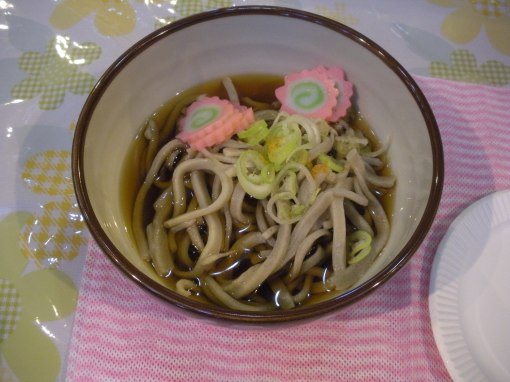 The third and last entry in the Pride of the School Lunch Centre’s Curry Rice Contest is “Furano Wine and Cheese Curry Rice” from Furano City. Please savour this curry we are proud of.

Two main agricultural enterprises of Furano city are wine and dairy products, you I am sure you can see where this curry’s inspiration comes from. That said, I didn’t actually eat school lunch today. Instead, I went to an elementary school. The 老人クラブ (Grandparent’s Club) was invited to the school and everyone made soba, inari sushi, and tsukemono together. You can see the soba made pictured above. The soba used was grown by the students at school, so over all it was a culmination of a project began last spring. The student I worked with was a tiny boy in third grade, but was very enthusiastic. When I asked him if he might want to become a soba chef, he said he would like that. He also remarked how soba was rather hard to make, but very easy to eat. So it made me happy that he understood how much work and effort goes into the food we so carelessly consume everyday.

Oh also, if you didn’t know, the origin of the term “inari sushi”. Obviously, sushi is the vinegared rice stuffed inside the bean curd pocket. Inari is the name an agricultural kami (god) whose servants are said to be foxes. Foxes (and thus Inari-sama himself) are said to be very fond of bean curd. Thus dishes which are characterized by their use of bean curd often use the word “Inari” or “Kitsune (Fox)”. 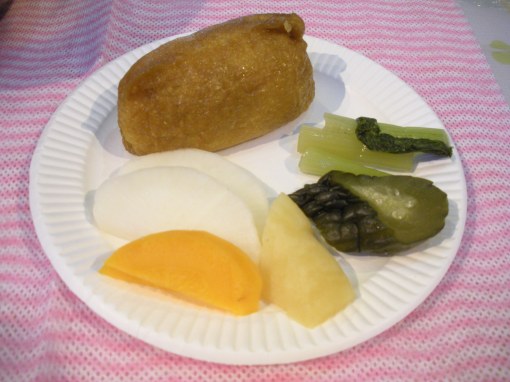 Inari sushi and many varieties of tsukemono 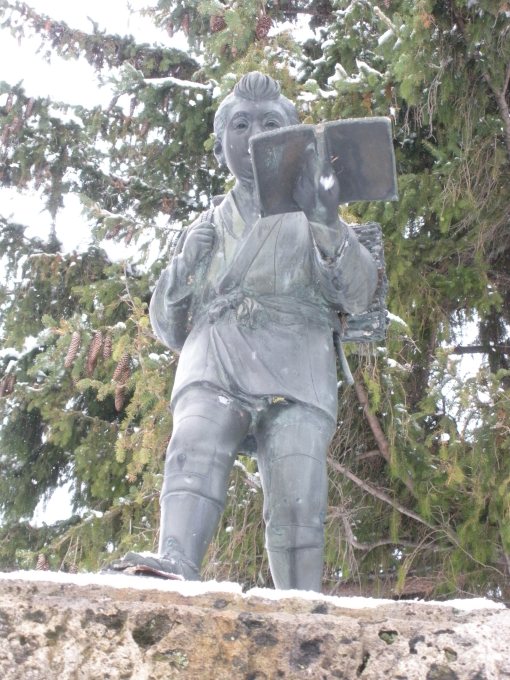 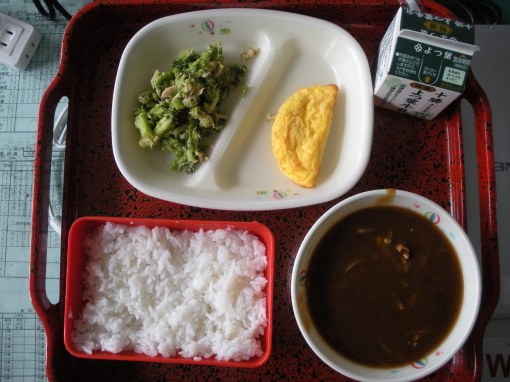 Broccoli and cauliflower.  Cauliflower was the earlier to be cultivated and is closer to the original plant. Broccoli is a variant variety of it.

Hayashi rice is a dish that resembles curry rice (especially the sweet curry rice of school lunch) but uses a thick tomatoish demi-glace sauce rather than curry. If forced to choose between the two, the majority of students prefer curry rice, but hayashi rice has a smaller, but solid following as well. I myself prefer curry. Hayashi rice seems to be one of those “Western” dishes that were created in Japan during the Meiji age of enlightenment. Where the name actually comes from is from much debate. It may have been named after a person (Hayashi Yuuteki or another Hayashi with different Kanji). Or it may have derived from the term “haya-shi” (quick death, for the poor animals used to make it) or “haya-raisu” (quick rice, to be eaten before boarding a ship). Or it may come from the English term “hashed beef with rice” degenerating into “hasshi raisu” to “haishi raisu” to finally “hayashi raisu”. By the way, sometimes people translate hayashi rice into English as “Japanese beef stew”, but hayashi rice is has a firm tomato taste that never belongs in beef stew, not to mention in Hokkaido it is made with pork over beef, so  I think it is a poor translation. 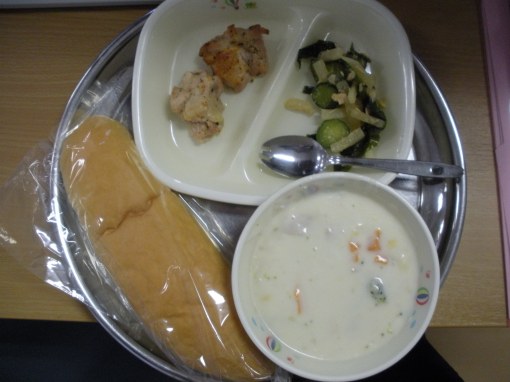 Chestnuts originate from Japan and the southern part of the Korean peninsula. Chestnuts that grow wild are called shibakuri (brush chestnuts) or yamakuri (mountain chestnuts).

Today’s Chinese salad had a cool, healthy taste that was surprisingly good, but I am not sure what makes it Chinese.  I have never been to China and know nothing about Chinese food, but at most the chinese-style restaurants I have been to, there have been an abundance of  dishes coated with a sort of slimy sauce. (I apologise to Chinese people for making such a mean statement.) Today’s salad didn’t have a sauce like that at all, which was a good thing. Also while I don’t like meat/poultry, for being a chicken, the Lemon Basil Chicken was pretty good. Finally, the name of today’s stew is actually a sort of pun in Japanese. “Kuri” means chestnut and “kurimu” means cream: So the name of the stew was actually “kuriiiiimu stew”.  Yum! Yum!

So, I grew up on an tropical island and there were no chestnuts there. I had never eaten a chestnut, never even seen a chestnut, until I came to Japan. But that is natural. The weird part is that even as a child I was fairly well acquainted with what a chestnut was. Because there is that Christmas song: “Chestnuts roasting on a open fire, Jack Frost nipping at your nose….” Why do I know that song? It’s about snow and cold weather. My hometown is 20 degrees away from the equator! The answer: globalization. Or colonialism. They are actually pretty similar things. The fact that I can know about chestnuts even having grown up in the tropics is pretty awesome, until I considered what sort of native culture was crushed to make room for this alien information…. 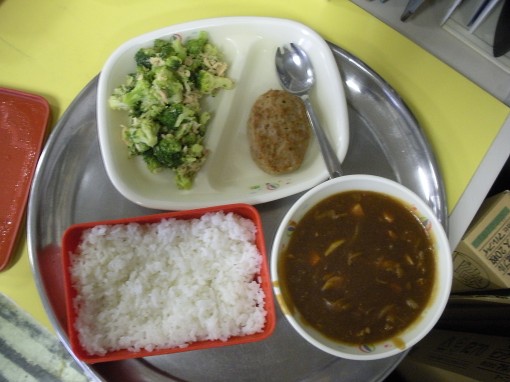 Green perilla (aojiso) dressing started as a seasoning for seaweed, to make eating it delicious. However, now it is used in many different dishes.

Hayashi rice is similar to curry rice, but uses a demi-glace sauce rather than a curry based one. They both have the same feel to me, but many people have a distinct preference for one over the other. Today’s broccoli and tuna’s aojiso dressing has almost a tangy taste, which I enjoy. It makes the generally lackluster broccoli interesting.

When I was in school, we usually had assigned seats. How they were assigned depended on the individual teacher. Sometimes it was carefully planned: separating noisy talkers or pairing low-level students with high-level students. (By the way, I can’t recommend that. It is humiliating to the low-level student and a hinderance to the high-level one.) Sometimes the seats were assigned randomly. Not uncommonly, seats were assigned merely by where you happened to be sitting on the first day of class. When I had a choice, I chose the front corner seat. Teachers always kept an eye out for troublemakers sitting in the back of class, and often called on those sitting in the front of class. However, my favoured front corner seat was generally overlooked. Thus I could do my work in relative peace.
In Japan, students are often sat in four rows of 4 or 5 pairs, each consisting of a boy on the left and a girl on the right, although there are exceptions. I imagine this system was introduced not to prevent talkative friends from sitting next to each other (that isn’t a big problem here), but rather to accustom boys and girls to interacting with each other. But I don’t really know.