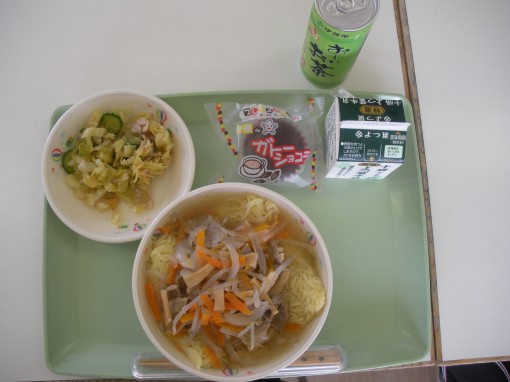 Gateau is often requested. The secret to its popularity is its soft texture together with the rich taste from the cocoa bean. Please enjoy it!

Today’s salad had a surprising vinegary taste. It seemed to be something like ohitashi dressed in an italian style dressing. Also, eating it today, it struck me that we never have processed meat in school lunch, which is probably a good thing. As a special treat today, we also had Ito-en tea. I love Ito-en because I used to drink their Oi Ocha every weekend while eating Kinoko-no-yama when I was in university (I had such a nice boyfriend back then!) I asked why we had Ito-en today, and apparently it was a graduation present to the school from the post-office. Yeah, that is how awesome our post-office is. And finally, who doesn’t love Okome de Choco Gateau!

Here I am having Tea with my students.

Formal etiquette is something I have always had an interest in; I often used to read this 1960’s edition of Emily Post just for fun. That said I really didn’t learn any sort of etiquette beyond basic table manners at home. While of course my mother would scold us if we chewed with our mouths open or shoveled food off our plates, we didn’t use a knife at dinner, much less learn how to handle one, and eating our peas with a spoon was perfectly permissible. But once I travelled over seas, I realized that lacking the ability to eat in a proper Western manner marks one as a sort of ignorant person. Anyway, my point is that I think playing tea party is a very important part of internationalization too. Finally, I want to say that all the Japanese I have had dinner with have had impeccable table manners.