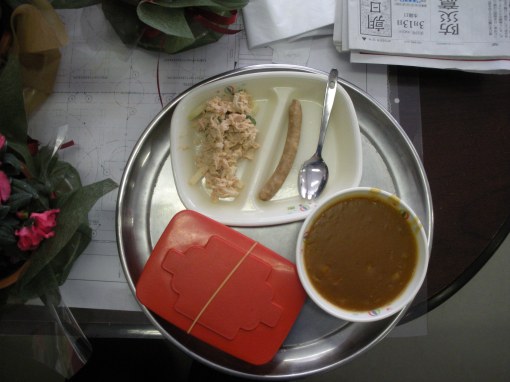 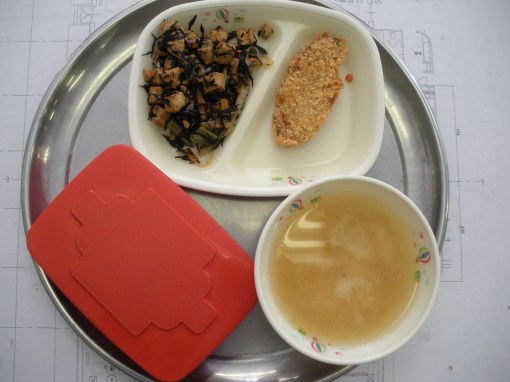 Hijiki is a a food lots of Calcium and Iron, for which we need to build strong bones and prevent anemia. It also has a lot of zinc, which prevents distortion of our sense of taste.

Hijiki and atsuage is yummy! Today, I told my students that we call the fish today, “mahimahi” and they thought that was pretty amusing. Like Hawaiian, Japanese has many words made of repeating sounds, but most of them are onomatopoeia, so a word like “mahimahi” sounds a bit strange as a fish’s name. That said, it was tasty.

Anyway, I was reading a book about Moribe, a Japanese philosopher back in the day who stressed the importance of not abandoning Japanese classics in favour of Chinese\Western books. He argues that, in Japan, Japanese classics should be considered the base of knowledge but that foreign books are nice for supplementing them. And he compares this eating etc:

“Rice and fish are enough to fill one’s belly, but how much more satisfying it is to have vinegary dishes and seasoned vegetables. In much the same way, a man who already has a wife is still happy upon acquiring a concubine.”

I think this is an interesting quote, because it illustrates that in Moribe’s time, rice and fish were considered the basis of diet, and vegetables were considered more of a delicious addition, like dessert. Perhaps that mindset still as influence today, and explains why vegetables are better received by most Japanese children?

I love you Moribe!!! 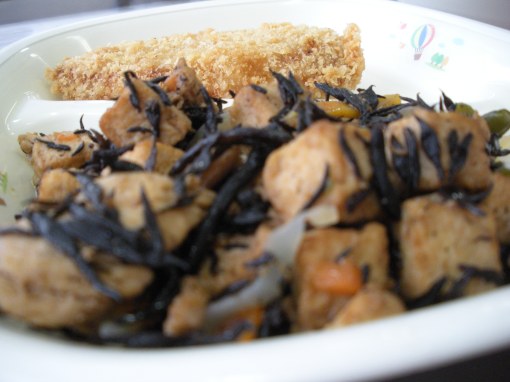 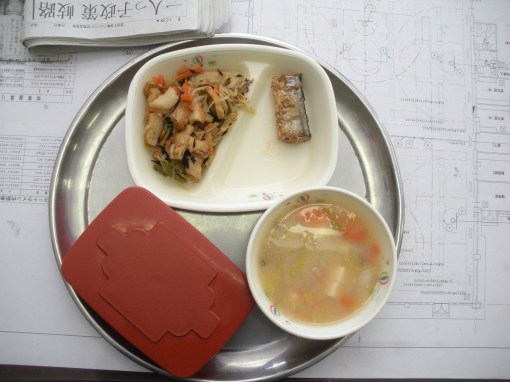 Tofu 「豆腐」 is a food handed down from China.  The character fu 「腐」does not mean “rotten” in China, but means “something gathered from a liquid to make something firm out of something soft”.

To explain what the kyuushoku tayori means by the above, I should say that 腐 means rotten in modern Japanese, so the characters for tofu seem to literally say “rotten beans”, which does not sound the most appealing.

Anyways, the saury fish today is not that beautiful and rather hard to eat, but being plum-simmered gives it a really nice taste. I say this as a very picky eater. So frightening to behold, but delicious. I like hijiki and satsuma-age and konnyaku so much, so I really liked the simmered daikon, but judging from my students plates, the saury was far more popular than the daikon….

Other exciting things today was one of the boys split his entire soup all across his lap and we got to eat ぼっけもんsweets by 風月堂 from Kagoshima prefecture, since the superintendent brought them back as omiyage! I ate it before I could take a picture. I’m sorry. 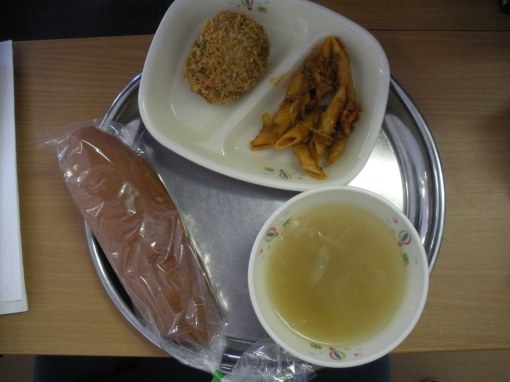 Penne has a diagonally cut mouth, and since this resembles a “pen”, it is called that. The small proves on the outside of the noodle are to help hold the sauce.

Today, I think I accidentally stole Kyoto-Sensei’s lunch. He, of course, was so kind to pretend that it wasn’t so, but I still feel a bit bad about it. Today’s lunch was tasty though! Esp, I liked the western style soup. Although thinking about it, I pretty much love all soups. Penne and Squash are both pretty heavy foods, so I felt so full afterwards. One of the boys at my table today ate over two full school lunches–two milks, two rolls, two croquettes, and a ton of penne–which was amazing. Even his classmates were impressed.

Poor actors in theatre are called “Daikon Yakusha (Radish Actors)”. Because daikon are easy to digest, even if you eat a lot of them, you will rarely get (lit. hit) food poisoning. Thus actors who rarely have a hit are called Radish Actors.

Speaking of Japanese theatre, I was reading in a book the other day that in the Edo period, while the amount of people who actually went and watch theatre wasn’t that high, the amount of people who read books and papers about actors and theatre life was very great. As someone who has no interest in celebreties (theatre or otherwise), I thought that contrast was interesting. 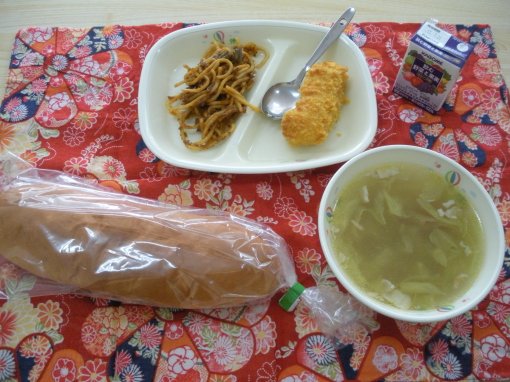 The meatsauce used in school lunch, due to coming in a can, is premixed with the spaghetti. Enjoy the slighlty different taste as compared to Napoliton.

Today’s soup had a stronger than usual taste of bacon, I thought. But I have a soft spot in my heart for cabbage soup, so I thought it was good. The croquette was just that: a croquette of a thick cream. It sort of reminded me of like condensed cream of mushroom soup. Speaking of cream of mushroom soup, here is an amusing anecdote. When I was child, I didn’t like mushrooms because they looked weird. I mean seriously, my grandfather kept a jar of dried shiitake mushrooms on top of the refrigerator and do they not look weird?! But this led to me refusing to eat mushrooms of any variety, to the point I would pick out even the tiniest squares of mushroom out of cream of mushroom soup. Actually, that anecdote wasn’t that amusing, and really only served to show what a picky and selfish child I was. (-_-;)

Back to school lunch. I am not overly fond of spaghetti nor meatsauce/spaghetti sauce.  That said, I liked today’s spaghetti dish better than the spaghetti napolitan. The term used for today’s dish is actually rather interesting. Literally, it reads: Spaghetti Meatsauce Ae.  “Ae” is a type of preparation, usually meaning rather than cooking the dish it is “dressed” with a sauce like vinegar, or ground sesame, or mayonnaise. It’s really more like a salad than it is a pasta.

Oh, and yay for grape juice! 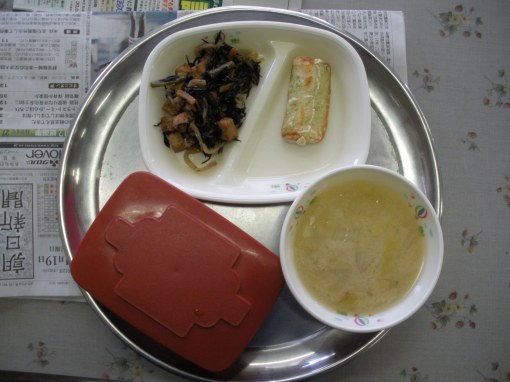 Stonehunt (Ishikari) Soup is a traditional dish of Hokkaido made with salmon. Threeflats (Sanpei) Soup is another Hokkaido dish. The difference is that threeflats soup is a salt based broth and stonehunt soup is a miso based broth.

I like ishikari soup and hijiki so much. They are both very tasty. Yum! Yum! I like chikuwa a lot, but it was a little bit oily today. Speaking of chikuwa, lately I’ve been buying this chikuwa with Furano onions mixed in with the fish and it is extremely delicious, straight or on rice. Besides this, it is very low in fat and pretty cheap comparatively speaking. 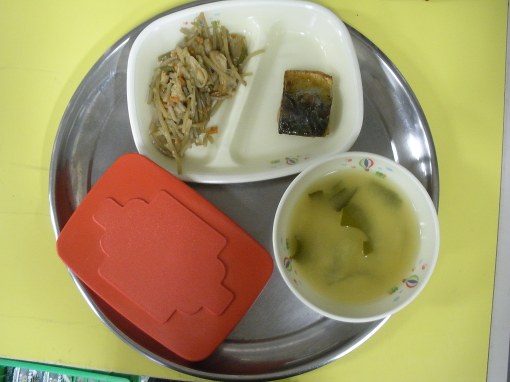 Gomoku (five-ingredient) means to have five items or to mix in a variety of thing. In cooking, there is also the case of when you combine fish, meat, or vegetables.

When I was a child, I had this awesome cookbook called “Five Ingredients or Less”. It was awesome because it was more likely we already had all the ingredients in the house and the recipes were pretty simple. My favourite recipe in that book was “Egg Drop Soup”, which is basically similar to the egg soup we eat here in Japan.

As for myself, one of my main eating flaws in trying to live on white rice alone. Seriously, I’ve had literal nightmares about getting beriberi. Yum!Yum! But slowly, I am trying to be more diverse. 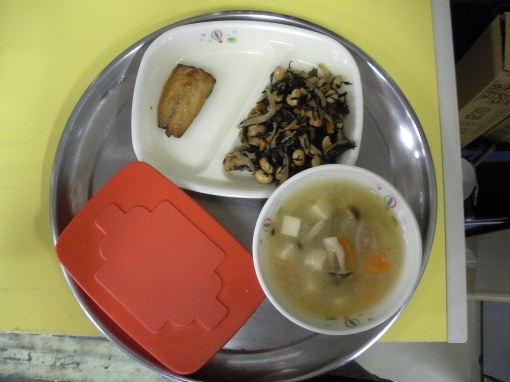 Konnyaku comes from the konnyaku taro, which is related to taro. It has lots of fiber, which prevents constipation and cleans out your intestines.

I caught a cold today. 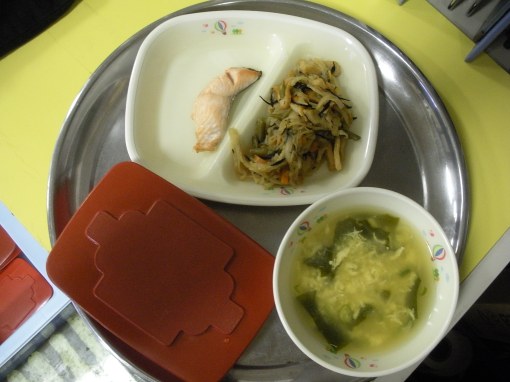 Kiriboshi (Dried) Daikon is daikon radish that has been cut into narrow strips and dried in the sun. Drying them in the sun gives their nutrition and sweetness a power-up.

I liked today’s lunch. I am a fan of hijiki. It has such a lovely wholesome taste that makes me feel energetic and healthy after eating it. Not to mention I also love konnyaku and satsuma-age, which were stirfried with it. Salt broiling is a nice way to cook fish as well, as it gives it a clean ungreasy taste. And you can’t really go wrong with egg drop soup. It was one of my favourite dishes to cook when I was a school child. 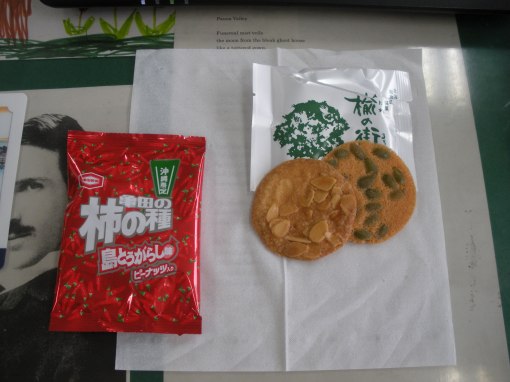 Two sweets I received at my desk. The red one is 亀田の柿の種 (Turtlefield’s Persimmon Seeds), a sort of rice cracker snack from Okinawa that goes well with beer. The other one is called 楡の街 (Elm Quarter), from a sweet shop in Wassamu, Hokkaido. It is a sort of biscuit made of crystallized sugar and egg, embedded with almond or pumpkin seeds.